To Book a Private with Wendy at Dogworks in Burnaby on Wednesday or Friday mornings, please click here! 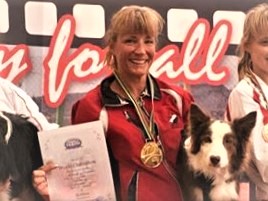 Wendy has two dog training certifications – she is a Certified Training Partner with the Karen Pryor Academy and a Certified Professional Trainer – Knowledge Assessed through the Certification Council for Professional Dog Trainers.  Wendy is also a certified Fitpaws Master Trainer for canine conditioning, and most recently finished her training and exams to become a certified OneMind Dogs Instructor!

Wendy has been competing and teaching agility since 1999.  Wendy has 5 dogs who have achieved an Agility Trial Champion of Canada Title.  Her dog Xena (who she recently lost at age 15) was the 2nd dog in B.C. to earn a Gold Versatility Award.  Her dog Phoenix won both the 2012 and the 2015 National Championships and was a finalist at the prestigious 2010 Purina Incredible Dog Challenge finals in St. Louis, MO.

Wendy has also won seven BC/Yukon Regional Championships with three different dogs. Wendy has qualified to be a member of 8 Canadian World Agility Teams.  Her dog Chili was selected to represent Canada on three different world teams – 2014 IFCS Canadian Team, 2014 WAO Canadian Team and 2015 IFCS Canadian Team. Her Border Collie Crush traveled to Spain (Apr 2017) with the IFCS Canadian Team and won a Gold Medal in Bathalon, she also competed on the IFCS team in 2018 and 2019.  Most recently Crush won a Bronze Medal in Biathalon at the World Agility Open in the Netherlands in 2019. She was also named to the 2020 WAO and IFCS teams which were unfortunately cancelled.  Crush was also 1st at the 2017 and 2018 BC/Yukon Regional Championships and 2nd in 2019.  She placed 2nd at both the 2017 and 2018 AAC National Championships. Many of her students have achieved the highest accolades in agility including multiple 1st  place podium placements at the Regional and National level.