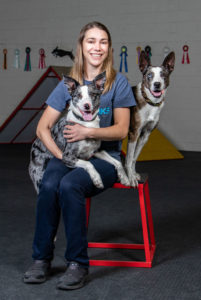 Dove Cresswell, CPDT-KA  (Certified Professional Dog Trainer – Knowledge Assessed), CTDI (Certified Trick Dog Instructor) competes in several dogsports with her dogs including Agility, CARO Rally-Obedience, Flying Disc, and Dock Diving. In Agility, she has competed all over North America, earning many titles on her dogs, such as Agility Trial Champion of Canada (ATChC), and she has had many podium placements with multiple dogs at the AAC Regionals 2011-2019, 2021, Nationals, and in multiple USDAA Regional competitions. In Rally-O she has earned the Versatility (CRVMCL) title on multiple dogs, including some perfect 200 scores.

Dove and Torque earned a Silver Medal at the Cynosport World Agility Games in 2018, and 1st place in the extremely competitive 20″ Regulars height class at the 2019 BC/YR AAC Agility Regional Championships.  In 2020 Torque won a National Championship in the UKI Canada Cup, and in Aug 2021 both her dogs earned Gold Medals in Pentathlon the UKI Classic Cup Agility Competition, as well as both took 1st Place in the Masters Series in two different height classes.  In 2021, Dove’s dogs also had several podium placements in individual rounds at the AAC Regional Championships, and she placed 2nd overall with Torque in the 16″ Veterans catagory, and 4th Overall with Jedi in the 24″ catagory – his first Regionals ever!  Dove can often be found ringside cheering loudly for her students and friends as well!

Dove and her 4 year old dog Jedi are proud to be named to the 2022 World Agility Organization (WAO) Team Canada in the 24″ catagory dogs.

Dove is also a Teamsters Union professional Animal Trainer for the film industry and has worked on many major films and tv series, including Once Upon A Time (Seasons 1-7), A Million Little Things (Seasons 1-4), Marmaduke, Cats and Dogs 2, X-Files 2, Marley and Me 2: The Puppy Years, Diary of a Wimpy Kid 3: Dog Days, and many, many more.  Dove has been training multiple species of animals for film since 2000. 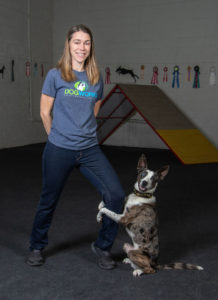 Dove has also been very involved with several local dog rescue groups and has fostered over 75 dogs in her home over 10 years.  Thanks to fostering all of these dogs in need, she had lived with dogs first hand who had a variety of special needs and behavioural issues including various anxieties and reactivity.  Learning to live with and train these dogs to become wonderful family members for their new adoptive homes has given Dove a very broad range of training experience.  She has fostered many different breeds and mixes, from chihuahuas to mastiffs.