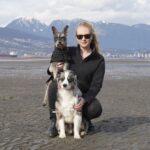 Karolyn is an Accredited Puppy Start Right Instructor through the Karen Pryor Academy.  She is also pursuing a diploma in Animal Behavior Science and Technology through the Companion Animal Sciences Institute. 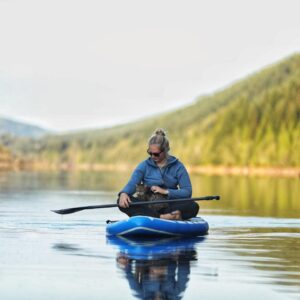 Karolyn moved from Rhode Island to Vancouver, BC several years ago and quickly embodied the outdoor west coast lifestyle with her two dogs, Camilla and Jasper.  Camilla is a 7-year-old miniature schnauzer and Jasper is a 10-year-old miniature Australian Shepherd, who was adopted at age four. Dog training was always a passion of hers and once being introduced to the dog sport world with puppy Camilla, she was hooked! She also has an adventure cat, Bono, who has his Novice Trick Dog (Cat) Title.

Karolyn has trained and competed in a plethora of dog sports including; agility, disc, barn hunt, dock diving, nosework, and rally obedience.  Her dogs are also trained to detect human remains as part of a Search and Recovery team. Karolyn also works as an Animal Trainer for the film industry.

Camilla started agility training shortly after her first birthday and she obtained her her Agility Trial Championship of Canada (ATChC) title at just two years old.  Since then, she has won top placements at the Regional and National Agility Championships in both the Agility Association of Canada and UK International agility organizations.  Including, winning the BC/Yukon Regional Championship.  Most recently, Camilla won Top Dog at the UKI Western Canada Cup for the 2nd time and placed 3rd in the UKI Agility Nationals Final. 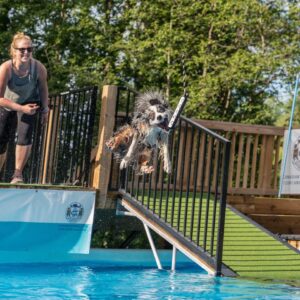 Jasper had to work through several behavioral issues and learn an appropriate outlet for his high energy and drive.  He is now a disc trickster and naturally gets huge air on all his catches.  Because of Jasper’s love of disc, Karolyn became a certified UpDog Challenge Games Judge.  Jasper also competes in Dock Diving with a personal best of 19’6”.   Jasper is also a trained film dog, and has worked on several commercials and TV shows.  His Bubly Water commercial debuted during the Super Bowl this year!

When not training or competing in dog sports, Karolyn is an avid hiker and hikes with her dogs five days a week! 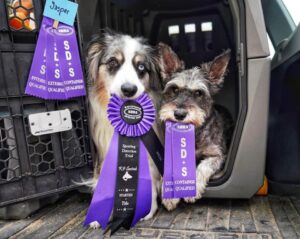 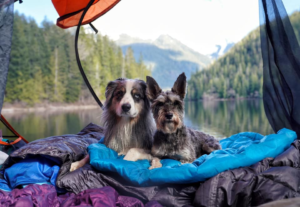 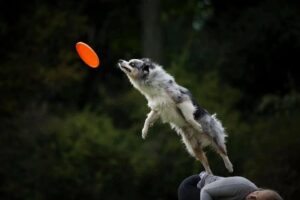